We are working hard to process orders! As a result of COVID-19, please understand delivery times may be delayed. View details

Rating:
100% of 100
1  Review Add Your Review
$269.99
In stock
SKU
47KEY2004
Notify me when the price drops
Checkout now
Are you an Amazon customer? Pay now with address and payment details stored in your Amazon account.
Add to Wish List Add to Compare

Skip to the end of the images gallery 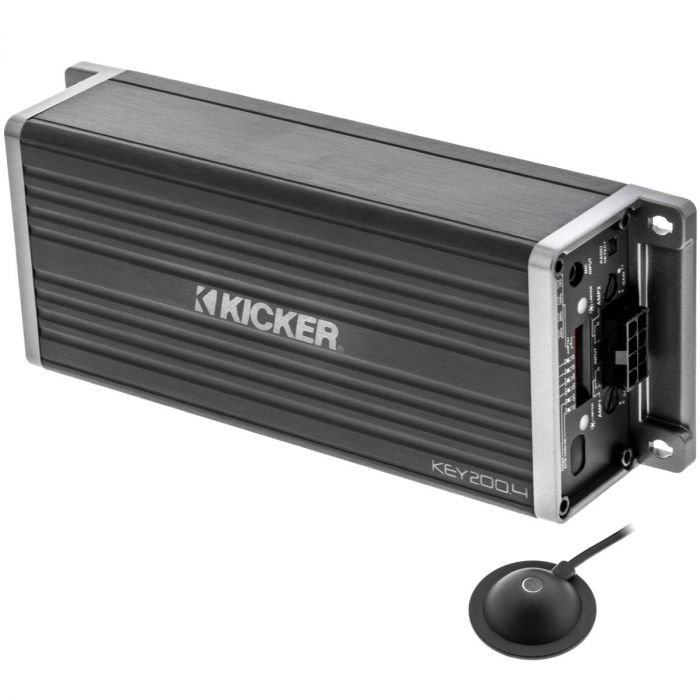 Skip to the beginning of the images gallery
Description

The Kicker 47KEY200.4, a 4 channel car amplifier that is an immediate upgrade to your factory audio system with its built in A.I. Driven DSP. Don’t just make your system louder - make it clearer. Make it better. Press the selector, and the microphone goes to work. The KEY uses a powerful internal computer to deliver dramatic improvements in realism and soundstage. A massive 40-band equalizer improves tonality, and a 24dB crossover re-defines the capabilities of each speaker. The amp is capable of pushing all of 45 watts through 4 Channel to the front as well as rear speakers, all emanating from a single chassis that is tiny and powerful. The concert quality of your factory stereo is revealed! What would take hours for a professional to achieve happens in a matter of minutes. All automatically. All with the press of a single button.

Our testing and analysis of the Kicker KEY200.4

How much actual power do you think we could get from an amplifier that’s smaller than a standard brick? Kicker’s KEY200.4 is a compact 4 channel smart amplifier with a built in processor and AI-driven DSP. Kicker claims this amplifier will send 50W RMS of power to each of your front and rear speakers. Stay tuned for our power testing in a minute.

We did a video on the original version of this amplifier a few years ago, the KEY180.4, but Kicker has given the 200.4 more power. The KEY200.4 is a complete 200 watt, four-channel amplifier and acoustic solution in one. Using a powerful internal DSP and calibration microphone, the KEY delivers dramatic improvements in realism and soundstage without the need for an external processor, EQ or RTA, according to KICKER.

The Auto-EQ feature of this amplifier corrects the audio output performance of your system with a simple touch of a button.

Once installed, plug in your calibration microphone, start the test noise, which you can download from Kicker’s site, hit the activation button, and the KEY’s processor goes to work. Using proprietary algorithms developed in-house by KICKER engineers, the system detects the factory EQ curve and applies a correction. Using the microphone the amplifier listens to the speaker outputs and applies a 24dB crossover and 40 bands of equalization to minimize peaks and valleys to flatten the output curve. The amplifier outputs a robust 45 watts per channel which is plenty for most factory speakers and mid-level aftermarket speakers. Custom time alignment and gain levels are also applied to each driver. Time alignment and Kicker EQ can be bypassed if you aren’t a fan.

The amplifier is capable of Bi-amping allowing you to connect a two-way or three-way speaker system and run a fully active or semi-active crossover with fixed crossover points.

Unfortunately the ampl is only capable of driving four ohm loads. The amp technology uses FIT2™ (Fail-Safe Integration Technology) and start/stop compatibility to work with nearly any vehicle on the road today. The amplifier also has a radio detect option. This feature is designed for factory audio systems in newer vehicles that require a load on the outputs when connecting an aftermarket amp. This feature enables a load resistor at the amplifier’s inputs and tell the source unit there are speakers present preventing pops and other speaker damaging behavior.

To simplify installation, the amp can be activated via remote 12v signal or DC offset. The DC offset mode detects a 3V DC offset on the speaker wires when the source unit has been turned on.

One of the best features is the KEY amp has tons of built in speaker protection. Utilizing the Limiter function, Kicker has developed protection methods for Engine Start, Start-Stop, Low-voltage, Inputs signal overdrive, and Over-temperature.

Kicker has also added one other protection system, Compression. This limits the output of the amplifier as it starts to clip. It will allow for a minimal amount of distortion protecting your speakers from deadly output clipping.

Compatibility
Product Q&A
Customer Questions
No Questions
Have a question? Go ahead and ask anything. We are here to help. Please login to ask a product question.
Installation Videos

Let's start with the basics of adding or installing a car amplifier. First you will need to plan your installation and power wiring, this usually is the most difficult part of the installation for most.

How to choose the proper wire size explained

What size power wire do I need for my amplifier? Well, that depends on the length of the wire and the power consumption of the amplifier. We walk you through how to choose the right gauge wire and wire material depending on your amplifier installation requirements.

How to wire speakers and subwoofers to your new amplifier

In our third video we demonstrate the various ways you can wire speakers and amplifiers to all types of amplifiers. There different ways to do this depending on the type of amplifier you choose to purchase.

What is gain? How do I set it properly?

In our fourth video we demonstrate how to set the gains on your amplifier to prevent damage to your speakers, subwoofers and even possibly your new amplifier. Using a portable oscilloscope we show you how to set your gains.

We found other products you might like!
More from Kicker
©2003-2021 Mobile Electronics Display and Accessories Co., Inc.