×
Price:
Actual Price:
Our price is lower than the manufacturer's "minimum advertised price." As a result, we cannot show you the price in catalog or the product page.

You have no obligation to purchase the product once you know the price. You can simply remove the item from your cart.
Our price is lower than the manufacturer's "minimum advertised price." As a result, we cannot show you the price in catalog or the product page.

You have no obligation to purchase the product once you know the price. You can simply remove the item from your cart. 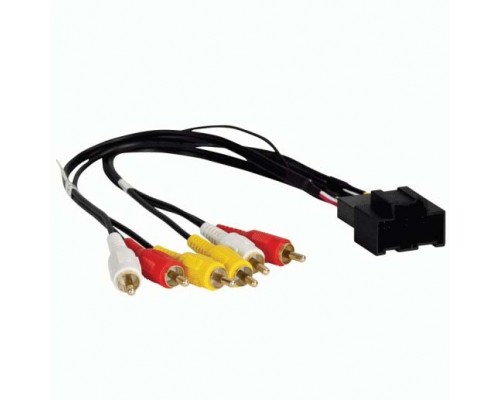 Ask a question about this product

« Back to Main Product Info

Overall Rating 0 (Based on 0 reviews)

Be the first to review this product

The GMRSAV interface is designed to allow you to install an aftermarket radio into 2012 - 2014 select GM vehicles vehicles and retain the factory rear seat entertainment system. The GMRSAV is designed to integrate the new radio to the factory video system and provide an audio video input to the new radio from the rear seat control panel. The interface retains full functionality of the OEM system.

Write Your Own Review

Have a question? Go ahead and ask anything. We are here to help.

We remove our original amplifier to install two new amplifiers and a DSP processor. This system takes our previous system to the next level. We now have tons of power and full control of the output of our speakers with our DSP processor while suing our factory head-unit!

In this video we show you how to install power distribution, mount and install two amplifiers and redo our fuse holder and power wiring. We also build a complete harness to our factory head-unit without modifying the vehicles wiring and mount our DSP processor to a factory bracket

We demonstrate how to install a Sony head-unit in a 2016 Ford F-150. We show you how to properly install the radio using a Metra dash kit and Metra wring harness while retaining the steering wheel controls and factory AC controls

How to - Car radio installation

How to Correctly Install an Aftermarket Car Stereo, Wiring Harness and Dash Kit

We show you how to properly wire subwoofers. There are many options with dual and single voice coil subwoofers and they all present different loads to your amplifier. We show you the do's and don'ts!

Learn the basics of an aftermarket car stereo installation. First we walk you through a step by step process of the wiring harness installation, then we show you how to mount the units using a dash kit.

It very easy to confuse your self and order the wrong Metra Wiring harness. For most vehicle's, Metra manufacturers two harnesses, one to replace a damaged OEM harness and the other to facilitate the installation of an aftermarket car stereo system. We show you the differences so you can choose the one you need.

Wiring Harnesses & Interfaces - What Do Your Wire Colors Mean?

We take a Metra wire harness and break down what all the wires do. We then take you through how to make a harness for your car radio installation.

Check items to add to the cart or select all

Prices, specifications, and images are subject to change without notice.
Qualitymobilevideo.com is not responsible for typographical or illustrative errors.
All trademarks and trade names are the property of their respective trademark holders.